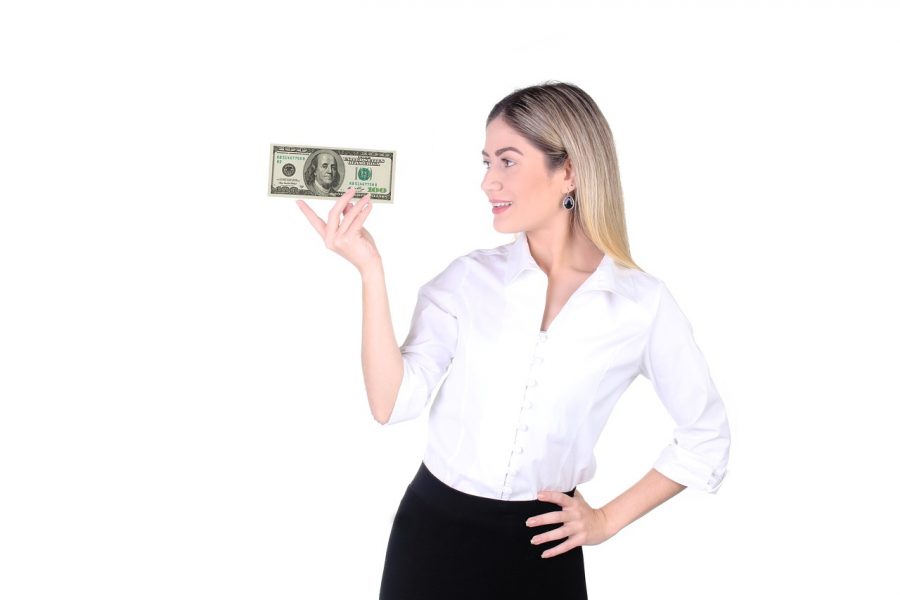 Different men have a LOT of sexual fetishes, take it from me. Most of them are a solid “whatever”; they don’t personally get me all hot and bothered, but I’ll cater to them, especially if there’s a big tip or a paid lap dance in it for me. More importantly, I GET them. Even if I don’t share a kink myself, I can understand why someone else might like it.

Basics of Findom, or Financial Domination

Like any D/S relationship, this can be mild or extreme; guys might do as little as send their findomme just enough money to cover a new pair of shoes (the same thing as just buying her the shoes, which isn’t even unusual, but doing this way is hotter for the guys), or as far as turning over their entire bank account. “Finsubs” come in ALL types.

More: Does Findom Qualify as Sugaring?

Spotting guys with fetishes like this is something that comes up a lot in the club. After stripping for years, I’ve learned to “read” customers pretty well. It’s all about the tells. Like, every once in awhile when I’m mingling on the floor, I’ll see someone glancing down at my feet when he thinks I’m not looking.

Sometimes that just means he’s shy and feeling intimidated (for whatever reason) by me, but I’m going to say a good 4 out of 5 times, it’s actually because he has a foot fetish. Figuring that out for myself is really important, because it’s not the kind of information most men will just blurt out (unless they’re drunk), yet if I know or strongly suspect it about someone, I can usually get a lapdance out of him just by promising to take my heels off.

And in case you’re wondering, yeah, I’ve run into guys at the club who wanted me to be their findom goddess, at least for the night. My favorite was the well-dressed, older gentleman who seemed afraid to slip a $20 bill into my bra while I was sitting on his lap. I tapped my boob and said something like “go on, put it there,” not even meaning for my voice to sound firm or commanding.

But I guess it did, because he got this fire in his eyes and a lusty grin came to his face. I already had some experience with the whole findom fetish before, so I leaned over and asked him if he liked what I just did. When he nodded VERY enthusiastically, I sensed that I might have a huge opportunity on my hands.

So I leaned over and whispered to him that we should go to the VIP room together, which is always a risk for me because I don’t turn tricks in there like most strippers do, and I could easily disappoint and piss off a paying customer. But he was very eager, so we went.

We spent two glorious hours in that room doing nothing but talking about how he’d love to spend all his VERY considerable money on me, with him slipping me $20’s and even $50’s every few minutes. Yeah, Every Few Minutes. I made over $2,000 on that VIP room visit ALONE!

Camgirling as a Findom Goddess

Fortunately, your girl’s got your back: I happen to have found a way to make money online that is actually a LOT like stripping, and guys looking for a findom goddess are much more common. I guess it’s easier for them to “come out” so to speak when it’s over a computer. Whatever it is, they’re there, and that fact changes the whole question of how to be a findomme.

More: How To Become a Cam Girl – Expert Tips…Tap Here

By using tags like “findom” and “financial domination”, you can keyword yourself into your finsubs’ hearts. Meanwhile, wearing a sign around your neck at the club that says “I AM A FINDOMME”…well, I’ve never tried it, but somehow I don’t think it’d go over too well.

More: How To Be a Findomme – Tap Here

You’ve still gotta get the attitude down, though. The most important thing about how to be a findomme is acting like a goddess: A findom goddess. That means being assertive and in-charge, and pretty upfront about how you expect to be paid for your time (that’s what these guys are into, after all).

A pretty effective idea I’ve used is to completely ignore everybody in the channel who hasn’t tipped, and make it clear that you demand a “tribute” before you’ll so much as acknowledge someone’s existence. Any decent finsub will REALLY get off on that kind of thing, and it brings in revenue.

You can use a lot of different cam sites for this, but personally, I’ve found that Chaturbate is the best. It’s one of the biggest out there, so it has huge traffic, and its interface is pretty friendly. I really recommend giving camming a try; if you have any interest at all in being a stripper, it’s basically the same thing in online form. And it’s genuinely PERFECT for findom goddesses.

I’m a sugar baby, cam girl, and general bad ass truth-telling bish. I know the secrets to playing this game to win, and I’m sharing it all right here, so don’t miss a post!

Be aware that some of the links on this blog allow me to get paid. I only recommend sites and products that I believe in, though!